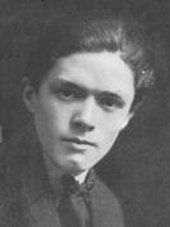 William Baines is likely to be the youngest of the war composers featured on this site, and for good reason. He had only just turned 18 in 1918 when he was called up and was undergoing military training at Blandford Camp in Dorset.

Never a particularly strong child, he had already been assessed three times for his suitability before it was decided he was fit enough to take on a role as a batman (personal servant) for an officer in the RAF which he took up on 4 October. It was the first time he had left his native Yorkshire.

Unfortunately, conditions at the camp were said to be the worst in the country and the flu epidemic that was spreading across Europe had apparently already broken out at the camp. Within two weeks he had succumbed to septic poisoning and was hospitalised. By the time he had recovered, the war was over, and he was demobilized on 24 January 1919 having spent the previous months recuperating. However, the illness had damaged his already weak health.

Born in Horbury near Wakefield, Yorkshire, he came from a musical family. His father was a cinema pianist and organist at a Primitive Methodist Chapel. Encouraged by his parents, Baines began piano lessons at a young age and later had formal lessons at the Yorkshire Training College of Music in Leeds, although his later compositional style was largely self-taught.

In 1913 the family moved to Cleckheaton and whilst there Baines was able to attend the concerts of the Bradford Permanent Orchestral Society and acquainted himself with the basic orchestral repertoire. The family moved to York in 1917 where, aged 18, Baines became a professional musician and gave his first public piano recital at which a number of his original compositions were heard.

Following his discharge from the military, aware of his precarious existence, Baines entered an extraordinary period of composition, and by 1922 he had completed roughly 150 works, mostly piano solos, a high number of which gained publication. He also completed a Symphony in C Minor (first performed in 1991), a Poem for piano and orchestra and a number of chamber works.

Many of his piano works are influenced by the landscape of his home county of Yorkshire. Several were composed at Nun Appleton House (of Andrew Marvell fame) whose owner Mrs Milner became a patron to the young composer.

His piano minatures often have descriptive titles; perhaps his best known works are are "Goodnight to Flamboro'" and "The Lone Wreck" comprising the collection Tides, named after Flamborough Head, the coastal promontory on the Yorkshire coast. His Seven Preludes from 1919 are amongst his finest compositions, displaying a virtuosic approach to the instrument. He continued to compose and give recitals, although his only major recital outside of Yorkshire was in Bournemouth at the invitation of the conductor Sir Dan Godfrey in 1921.

Baines' health had been steadily deteriorating since his illness in 1918. He died of tuberculosis aged 23.