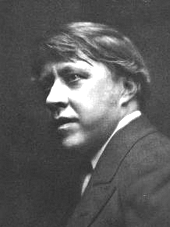 The effects of World War I continued to take their toll long after the guns had stopped in November 1918. It was the effect of a gas attack that led to the death of Debussy's protégé André Caplet, in 1925.

From a poor family in Le Havre, of which he was the seventh child, André helped his family by working from age 12 as rehearsal pianist at the Folies-Bergères. By 14 he was playing the violin at the Grand Théâtre and gained a reputation for improvisation such that by 1896 he had been recommended to enter the Paris Conservatoire where he was taught harmony and counterpoint.

In 1901 he gained first prize in the Prix de Rome competition with his cantata Myrrha, beating Maurice Ravel, and a string of further prizes followed. André also turned his hand to conducting for the theatre.

In 1907, he met Claude Debussy. Debussy recognised the young composer's talent for orchestration and Caplet was given permission to transcribe and orchestrate some of the older composer's most famous piano works, for example "Clair de Lune" in transcriptions that are still well-known today. Debussy allowed him to conduct the premiere of his cantata Le martyre de Saint Sebastien in 1911, whose orchestration Debussy had largely left to Caplet.

Caplet also worked to assist Debussy in proofreading his work, earning from him the sobriquet le tombeau des fautes - 'the graveyard for errors'. Roger Nichols' biography of Debussy states that Caplet became a "tower of strength" for the older composer in the years before the First World War.

Caplet's close association with Debussy has perhaps overshadowed his own compositional ability; early works influenced by 19th century Romanticism gave way to more modernist works in his own style. He Septet for string quartet and three wordless female voices of 1909 for example demonstrates an altogether different sound world from that of his mentor, and was amongst wordless French works of this period to be influential on composers such as Arthur Bliss.

Works such as Conte fantastique for harp and string quartet, and his orchestral Le Masque de la mort rouge (both based on Edgar Allen Poe's Mask of Red Death) exhibit a spiky modernism married to the Impressionism of his contemporaries.

In October 1910 he was invited by Henry Russell to conduct the Boston Opera Company, a role which saw him working in the States for at least six months per year. He become the company's musical director in 1912, a promotion which did not appear to have been affected by an affair with Russell's wife, Nina, which lasted until André volunteered for military service in August 1914.

Caplet had a tough war. He was wounded twice in battle, and the gassing he suffered permanently affected his lungs. The war heightened his faith, and at the front he wrote Les prieres, settings of the Lord's Prayer, the Hail Mary and the Creed. However, he did managed to continue composing throughout his war service.

Following the Armistice, his health severely weakened, he withdrew from conducting and teaching to devote his time wholly to composition.

He married Geneviève Perruchon in 1919 and his works from his period display an "esoteric Catholic mysticism", culminating in his choral masterpiece Le miroir de Jésus ou Mystères du rosaire ("The Mirror of Jesus, or The Mysteries of the Rosary", a tender and hypnotic work for female voices and orchestra composed in the Summer of 1923 which sets poems by Henri Gheon.

In 1925, he caught a lung infection. Already weakened by his gassing some years earlier, he died of pleurisy aged 53.

Several of André Caplet's manuscripts can be viewed in the National Library of France, for example this manuscript of his harp song "Quand reverrai-je, hélas..." , composed by Caplet during August 1916.