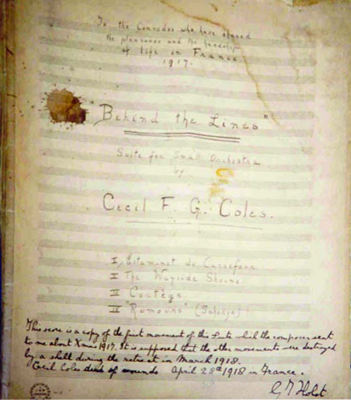 At Christmas 1917, Gustav Holst received a manuscript score splashed with bloodstains and muddy watermarks. This was the third movement, ‘Cortege’, of an intended four movement suite Behind the Lines written by a young Scottish composer whom Holst had taken ‘under his wing’ while he was a tutor at Morley College in London.

By the following April, its composer Cecil F G Coles was dead, wounded while attempting to rescue casualties from a wood near the Somme on 26th April 1918.

Other than a prominent dedication on Holst’s Ode to Death, Cecil Coles remained virtually unknown until 2002. His revival that year was due to the intervention of his daughter Catherine Coles whose research into her father, about whom she knew very little until the last years of her life, brought to light 40 piano, vocal and orchestral pieces stored in a cardboard box at George Watson school in Edinburgh.

Consequently, there is very little written about him, with the majority of biographies, as with this one, derived from the research of Catherine Coles, his biographer John Purser, the conductor Martyn Brabbins and the musicologist Professor Jeremy Dibble in their work to revive his orchestral works for release on a CD on the Hyperion label in 2002. He has since gained some exposure after being featured at the BBC Proms in 2003 and ‘Cortege’ was used as the title theme to the Channel 4 documentary series The First World War.

Like many of the composers featured on this site, Coles is very much a ‘what if?’ whose talent was not given the chance to mature, but listening to those works now, it seems surprising that his music languished in obscurity for so long. Some pieces such as his Four Settings of Poems by Verlaine have an attractive light operatic quality, evidence of his time working in the Stuttgart opera, others such as Fra Giacomo, regarded as his masterpiece, are more serious in tone and heavily influenced by the Late Romantic music of Germany. However, it is probably 'Cortege', a funeral elegy written in the midst of the war by a composer who was to die in that conflict that is the most evocative of his works.