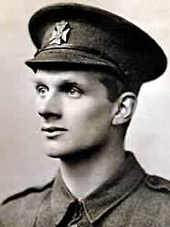 Cecil Coles was born at a house called ‘The Hermitage’ in Kirkcudbright (pronounced ‘Kir-coo-bry’) in Galloway on 7 October 1888. The son of a landscape painter and archaeologist, the family moved to Edinburgh at some point before the turn of the century. His father was later to become the Keeper of the Queen Street Museum.

From 1899 he attended George Watson’s College in Edinburgh and went up to Edinburgh University to study music in 1905. Having apparently seen an advertisement on an old newspaper a pair of repaired shoes had been delivered in, he applied and won a scholarship to the London College of Music (not to be confused with the Royal College of Music) in 1906.

As now, London was an expensive place to live for an impoverished student from a large family and despite his scholarship he apparently struggled to get by financially. There is an anecdotal story that rather than purchase lunch, he would simply walk past a nearby pickle factory and breathe in deeply.

He was subsequently taken in by a Miss Nancy Brooke who kept the orchestral library at Morley College, an adult education college founded in 1880. It was though this connection that he met Gustav Holst, who had been appointed Director of Music in 1907. Cecil joined the College orchestra and showed some compositions to Holst, who was impressed.

In 1908, aged 20, he won a scholarship to study in Stuttgart for one year. He was accompanied by Miss Brooke, who had become something of a mother figure for him in London and later became his first child’s Godmother.

He composed a number of works for orchestra during this period; a Scherzo in A for Large Orchestra was written in 1909-10 and his scholarship was extended for another six months either to complete this or his Shakespeare-inspired 1911 overture The Comedy of Errors. The latter was first performed by the Cologne Conservatoire orchestra in June 1913, notably with its title in German on the manuscript, along with many of the other compositions of this period.

Cecil met up with Holst for a walking tour of Switzerland in the Summer of 1911, where the energetic Cecil seems to have tired the often sickly senior composer out. Holst wrote after his return that he was having ‘the biggest rest I’ve had in my life’.

Cecil gained a prestigious appointment as assistant conductor at the Stuttgart Royal Opera House in 1911. This position would have given him a chance to meet many of the big names of German music of the time, and which certainly would have influenced his compositional style.

Compared to his contemporaries, many of whom had the indirect influence of German music via the Royal College of Music, Cecil gained first-hand experience of the latest German music; the works of Wagner and Richard Strauss have both been detected by musicologists as influences in his surviving works, and he was said to attend gramophone recitals of Beethoven, Schubert and Brahms while he was a soldier.

Cecil was one of many young British composers working in Germany around the turn of the century, with cities such as Stuttgart, Berlin and Dresden being common places for British composers and conductors to study and work, with many of these cities having sizable English communities. Ernest Farrar had undertaken a six month appointment as organist of the Freikirsche in Dresden in 1909, and in fact some composers and conductors found themselves trapped in Germany at the outbreak of war. Frederick Adler, Edgar Bainton, Benjamin Dale and Ernest MacMillan were all interned as enemy aliens at the Ruhleben Civilian Internment Camp for the duration of the war having been arrested while attending the Bayreuth opera festival as war was declared.

In addition to his post at the opera house, Cecil became organist and choirmaster at the English church of St. Katherine's. It was here that he met Phoebe Relton whom he was to marry in England at the church of St Saviour’s, Brockley Rise in 1912.

With the war looming and tensions mounting across the Continent, Cecil returned to England in 1913, where he evidently found it hard to find work. He toured with Thomas Beecham’s Opera Company and gained a post at Morley College as a teacher of elementary harmony and sight-singing where he deputised for Holst. In the meantime, he had also become regimental Bandmaster of the Queen’s Victoria Rifles (London Regiment).

In July 1914 his dramatic cantata Fra Giacomo for baritone and orchestra was performed at the Queen‘s Hall, the large now-lost concert hall in Portland Place, London.

After War was declared, Cecil was immediately called up as a result of his Bandmaster post, which entitled him to the rank of Sergeant. Bands and music were regarded as important to morale throughout the war, and while band musicians were non-combatants in the sense of firing guns, military musicians were often called upon to work in dangerous roles such as stretcher bearers which involved going to pick up injured soldiers often in the middle of heavy gunfire.

Rarely amongst the ‘war composers’, whose work either stopped or was severely curtailed during active service, Coles continued to compose and he sent Holst manuscripts whenever possible. With a lack of lined manuscript paper available at the front, some of these were written on notepaper with manuscript lines hand drawn on it by the composer. During a period of withdrawal, a shell destroyed some of his manuscripts, including parts of his final suite Behind the Lines along with all of his band's instruments.

On 26th April 1918, Cecil Coles was killed by a German sniper whilst on active duty retrieving wounded soldiers from a wooded clearing at the Somme.

His wife Phoebe never spoke of Cecil to her children, and over 40 piano and orchestral pieces were left in a cardboard box stored at George Watson school in Edinburgh until 1993. Other than a prominent mention in Holst’s Ode to Death, Cecil Coles remained virtually unknown until 2002. Indeed, it was only when in her 70s that Catherine Coles began to research her father that she discovered he was a composer; strangely, her music teacher at St Paul's Girls School was Gustav Holst.

Back to the Coles navigation page

Bibliography
This article is primarily derived from the CD liner notes of John Purser and Professor Jeremy Dibble which accompany the Hyperion release and a subsequent BBC Radio 4 documentary about the composer presented by James Naughtie.