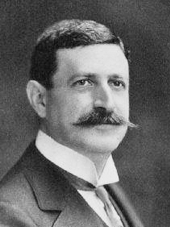 Fernand Gustave Halphen was a composer, violinist and patron of the arts. Born in Paris in 1872, he was the youngest of six children from a wealthy Jewish family; his father was a diamond merchant, his mother the daughter of a banker.

His mother in particular influenced her son's early interest in the arts; a painting of Ferdnand was commissioned by no less a figure than Auguste Renoir, today part of the collection of the Musée d'Orsay, Paris.

When age ten, through Fernand's sister (who was married to a noted patron of the arts) he was introduced to Gabriel Fauré, the pre-eminent French composer of the late 19th century. It was this early meeting with which was to have the greatest influence on Halphen's direction in life and the sound of his music. Fauré coached the young composer until his entry into the Conservatoire de Musique in Paris in 1885 where he was taught composition by Ernest Guiraud and later Jules Massenet.

Although his main focus was on composition, he was also a talented violinist and pianist - on receipt of one prize for composition in 1898, his father gave him a Stradivarius violin, and many of his chamber works are for violin and piano.

Although aged 42 when war broke out, he volunteered as a captain in the 13th territorial Infantry Regiment. Owing to his age, he was not posted to the front but given charge of a territorial regiment. There he founded a military band which he led for three years, writing and arranging music for the band; military bands played a large role in the drill and rhythm of training and base camps in the war. However, the conditions were not condusive to Fernand's health and he died of disease at a military hospital in Paris in May 1917.

During his life, he was a founder member of several trusts to develop music and music education in France, and following his death his wife created the Halphen Foundation to assist young composers to have their works performed.

Works
Free of financial concerns, Ferdnand was able to compose without having to find other sources of income. Thus, his catalogue of work is quite large, numbering over 150 compositions, few of which are performed today. They include a Symphony in C Minor of 1897, the Sicilian suite for orchestra (1896), a Shakespeare-influenced one-act opera Le Cor Fleuri ("the ornate horn", although usually translated as "Oberon's Horn"), performed at the Opéra-Comique theatre in May 1904, plus music for a pantomime, a ballet, many songs and chamber works, as well as examples of choral music.

A detailed list of works can be seen on the Musica et Memoria (fr) website and the score of Le Cor Fleuri and some of his chamber works are available at the International Music Score Library Project.

Several of his songs have been recorded on CD, and a CD of his piano and chamber music, Fernand Halphen: Melodies Pieces for Piano & Chamber Music was released on the Buda Musique label (860138) in 2006.

Over 600 documents, photographies, letters and musical manuscripts by Fernand Halphen have been donated to the European Institute for Jewish Music by his family, and have been made available to view online.