I can hardly imagine most musicians as soldiers. Bach as a staff-sergeant (handing over a pair of oversized boots), that would be okay, but Beethoven practicing rifle drill, Mozart throwing hand-grenades or standing guard in front of a barracks; Schubert as an air force lieutenant and Mendelssohn as an NCO at a vehicle fleet convoy? They are inconceivable. 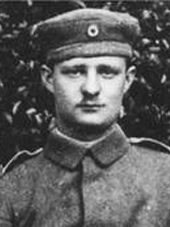 Thus wrote the composer Paul Hindemith at the commencement of his military training in the German Army. After several postings with military bands, he served on the Western Front at Flanders during the final days of the War. The War changed the trajectory of the young musician's life.

Paul's father was killed early in the conflict, leaving Hindemith as his family's primary source of income. Initially rejected for military service, but later conscripted in 1917, Hindemith had the good fortune of a posting under a sympathetic music-loving commander who kept him away from danger for the majority of the time. He allowed him to play in the regimental band and even gave him the opportunity to form his own string quartet.

More importantly, he was given his first real chance to compose music for this quartet, which he had few opportunities to do even as a violinist pre-war, and after the war he pursued a compositional career based on these experiences.

Paul Hindemith was born in November 1895. His family appear to have been in various states of impecuniousness throughout his childhood. His father Robert had wanted to be a musician himself - apparently he had run away from home when his parents disapproved of his wish to become a musician. Robert's dreams went unfulfilled, however, and he became a painter and decorator.

Never able to make enough money from this trade, Robert and his family moved around the Frankfurt region while he looked for work. Perhaps in an attempt to compensate for his own failure to become a musician, Robert resolved for his children to become professional musicians, and Paul began lessons on the violin in 1906.

Paul's Swiss violin teacher Anna Hegner saw immediate talent in the boy and recommended him to Adolf Rebner the leader of the Frankfurt Opera Orchestra. It was through his connections that Hindemith obtained a free place at the Hoch Conservatory in the city. Paul, together with his sister Toni and brother Rudolf became a small trio which toured the region to supplement the family's income, playing in taverns, cinemas, dances and in spa orchestras.

Gaining in ability throughout his teens, he obtained patronage from wealthy families in Frankfurt which allowed him to pursue further musical studies, both on the violin and composition, which he studied with Arnold Mendelssohn (the nephew of Felix). However, the outbreak of war meant that a university education funded by these patrons was not possible, something the composer regretted later in life.

It seems that his father's influence was a controlling one, and Paul appears to have had a disagreement sometime in 1914 that went largely unresolved when his father went to fight in the war. Paul's diary from September 1914 describes how his countrymen were swept along with the same fervour as the British, French and Russian sides at the outbreak of war:

Everyone is delighted to go into battle, everyone is happy to grab a weapon - nobody wants to be left behind. Even our enemies will have to admit that the German people are fighting for a just cause and have not, as the French, Russian and English propaganda machines wish to proliferate, gone to war just for rowdiness. The people are in a state of enormous enthusiasm.

Almost exactly a year later, his father Robert was killed at the Front. Paul, still only 19, became the primary source of income for his family.

Paul himself was initially refused entry to the German Army due to "physical weakness and heart defects", so he was able to take up a post in the Frankfurt Opera Orchestra, where he rose to become 1st concertmaster by 1916.

Not unlike Ivor Gurney, by the later stages of the war these initial medical concerns were largely ignored due to the shortage of men, and Paul was conscripted in August 1917.

He trained in the infantry, but was stationed in Frankfurt and allowed (at least initially) to continue his musical postings, coming to an arrangement with the director of the Frankfurt Opera House for his mother to continue to receive 70% of his income.

Luckily for Hindemith, his regiment (Reserve Infantry Regiment 222) had a band and a sympathetic music-loving commander. Not only was Paul allowed to play the drum in the infantry band but he formed a string quartet with other fellow soldiers. 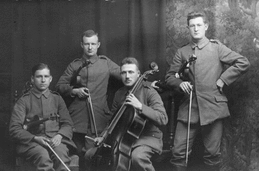 He wrote to a friend "Service is not so hard, I have a lot of free time and can work on what I want". In his first posting away from Frankfurt in January 1918, he was posted to a village in Alsatia which was not directly at the Front, and he even had time to compose his second String Quartet Op 10, a generally conventional work, but with a sinewy, strange atmosphere of being slightly out-of-control in places. It was while performing Debussy's Quartet in March 1918 that he received news of the composer's death and noted:

It was as if the spirit had been removed from our playing, but now we felt for the first time how much more music is than just style, technique and an expression of personal feeling. Here music transcended all political barriers, national hatred and the horrors of war.

Hindemith's generally easy postings were not to last however, and after a transfer to Flanders in May he experienced the Front for the first time. He wrote in his diary:

Towards evening eight bombs landed near the town. One hit the ammunition convoy that was camping 10 minutes away from us...A horrible sight. Blood, bodies full of holes, brain, a torn-off horse's head, splintered bones. Dreadful! How mean and indifferent one becomes. I don't think I could have eaten or worked in peace after seeing such a sight – and now one sits at home again, writing, chatting, in a good mood – not thinking about how soon the bell could also toll for us - are we going to withdraw unharmed?

The closest he came to real danger was during the very final week of the war. He was ordered to the trenches as a sentry, coming close to several grenade attacks. The sense of relief at the Armistice in his diary is palpable:

We were all woken and ordered to the Colonel...The Colonel entered from the castle door accompanied by several officers and read in candlelight...Shuddering, we heard that the Emperor abdicated, that Ebert will become Chancellor and – oh greatest bliss – that there will be cease-fire in the coming days... We went home as if dazzled, hardly able to grasp this news.

The post-war years were initially lean as Germany came to terms with the ceasefire and its repercussions for their economy. Returning to his orchestral post, he again supplemented his income by playing in bars and cafes.

He changed his primary instrument from violin to viola, the instrument he was later most associated with. With the experience of composition he gained during the war, Hindemith began to see himself as a composer first and foremost.

In June 1919 he organized a composition evening of his works in Frankfurt which brought him to the attention of Schott the publishers, and several early compositions were published. By 1922 they had agreed to be the sole publishers of his music and his reputation as a composer began to grow.

In the years following the war, his style changed from the late-Romanticism heard in the early quartets to a more expressionist, even avante-garde idiom, although some works such as Kammermusik (chambermusic) are generally classified as "neo-classical". He also developed his own thoughts on harmonic theory which manifested itself in his Ludus Tonalis of 1940.

By the late 1930s, the rise of Nazism meant that his music was scrutinised for "degeneracy" and he had a prickly relationship with the new regime. By 1938, mindful of his wife's Jewish ancestry, he emigrated to Switzerland and then in 1940 to the U.S.A.. During this period he completed his most popular works including the Nobilissima Visione (1938) and Symphonic Metamorphosis of Themes by Carl Maria von Weber (1943). He became a U.S. citizen in 1946 and he continued to work, compose and write until his death in 1963.