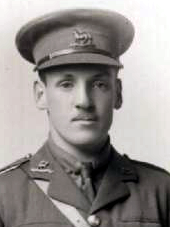 Perhaps best known today for his wind band music and the ubiquitous fanfare for the National Anthem, Gordon Jacob was a highly productive composer and teacher with over 400 works to his name including two full-scale symphonies, many concertos highlighting under-represented solo instruments, as well as shorter orchestral, military and chamber music.

When he died in 1984, Gordon Jacob was (with the exception of Herbert Sumsion, 1899-1995) the last composer of the generation of English composers who fought in World War I. His large body of music reflects his Royal College of Music heritage, founded in the tonal idiom of the early 20th century and his wish to make accessible music for all levels of ability, a formative skill he perhaps developed writing for amateur bands of whatever forces were available during his time serving in WW1.

Joining the army at the outbreak of war in 1914, his imprisonment in 1917 probably saved his life and ultimately led him to rekindle his schoolboy interest in composition. However, his older brother Anstey was killed and not unlike Arthur Bliss, E.J. Moeran and Ralph Vaughan Williams, he was to commemorate the war in a symphony. Like those composers it was to be some years before he felt he was skilled enough and emotionally ready to write the work.

Born on 5th July 1895 in Upper Norwood London, he was the youngest of ten children. His father Stephen was a colonial administrator stationed in Calcutta. Stephen died in 1898 in India when Gordon was three, so one can assume that any musical encouragement was from his mother Clara, his siblings and his teachers at Dulwich College. Indeed, the school performed early works for orchestra and organ by the young composer, although it appears that a career as a composer was not his primary intention at this stage.

Outbreak of war
Whatever his intentions were, the summer after leaving school the outbreak of war was declared. He was on a family holiday in North Devon and met with a friend from school who lived in the area and they travelled back to London to enlist immediately in the hysteria to sign up. Gordon joined the Field Artillery at Wimbledon on 26th August 1914 as a private. His friend, meanwhile, became an officer on account of being in the Officers' Training Corps (and was killed in action in 1915).

In Eric Wetherell's biography, he notes that the sheltered 19 year-old Gordon was shocked by the behaviour and lack of education of fellow soldiers, as well as the indifference of professional officers. His ability as a pianist was noticed and he found himself accompanying Sunday church parades on the harmonium.

Two months later, he was transferred to the more amiable company of the University and Public School Brigade of the Royal Fusiliers. These were "Pal's battalions" raised as part of Kitchener's Army of volunteers, the assumption being that men of similar interests or background would fight well alongside one another, often joining up together, fighting together and (as is often noted when surveying whole lost cricket and football teams), dying together.

Gordon (as a result of being recognised by a fellow 'Old Alleynian') found himself involved in army music, this time as a drummer for the regimental band where he soon began to involve himself in arranging music for them.

Training saw him move from Epsom to Mansfield and later to Salisbury Plain. He even wrote a song here called "By the Hearthstone", a setting of Henry Newbolt, which was published in July 1915 by West & Co - his first publication.

Posting to the Front
Following the completion of his training, he was posted to France in November 1915 where he was in the front line. He wrote to his sister Ismay about an incident where an Royal Engineer informed his company that his line of trench had been undermined by German tunnels and that a mine could explode underneath them at any moment.

Ordered to stand to attention and keep perfectly quiet while investigations took place, he recalled 'I kept wondering if I should feel anything, or if it would just be a black roar and then nothing.' It transpired there was no mine, but he recalled it was 'real enough while it lasted'.

Luck seemed to be on his side. In spring 1916 Gordon was sent back to England for officer training (the loss of so many 2nd Lieutenants during the early months of the war meant that the Public School Battalions were head-hunted for officer recruitment.)

As a result he found himself billeted at New College Oxford where he befriended the organist Hugh Allen. More importantly, his training in England meant he missed the terrible Somme offensive in July 1916.

His older brother Anstey, with whom Gordon shared a close relationship, was not as lucky. Anstey was killed on the Somme on 18th September 1916 aged 22. Gordon recalled that the telegram informing him of his brother's death was handed to him on the parade ground. Gordon felt the loss very keenly, and wrote that in his memory held 'a special aura, almost a halo'.

Following the completion of his training he was commissioned 2nd lieutenant and found himself on the Somme. By this point the offensive had run out of steam and his time in the trenches was spent largely waiting for the next order.

Capture and imprisonment
In April 1917, he was involved in an attack on German lines near Arras, during which he was taken prisoner. The composer recalled that he was one of only 60 survivors from his battalion of 800 men.

He found himself in a camp near Hanover where, as an officer, he was not forced to work. Instead, the camp appears to have been amply stocked with musical instruments and using a harmony textbook from the camp library he found himself making his first proper studies of formal composition.

After a move to a further POW camp near Bad Colberg he found several fellow musicians amongst the internees and formed a small orchestra. He noted wryly that 'we bought our instruments from the Germans, who were merely astonished that the English took an interest in music, having been under the impression that we knew nothing of any form of culture'.

Rather like the musicians interned at Ruhleben Camp, there appears to have been a lively artistic culture at Bad Colberg, and several photographs survive of Gordon playing the piano for entertainments. Here is Gordon Jacob (centre) with his orchestra at Bad Colbert in 1918: 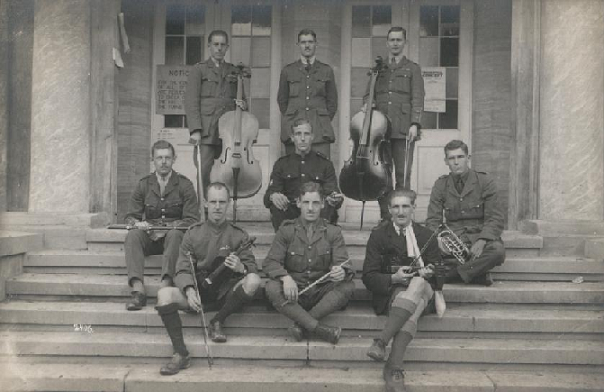 After the war, he was repatriated and demobilised at Crystal Palace in 1919. He initially trained to become a journalist, but his WW1 involvement in music had rekindled his passion and after following up his harmony studies with an RCM correspondence course which resulted in an ARCM diploma he was accepted to become a student at the Royal College of Music in 1920, an institution he was to remain with as a teacher for most of his career.

As a result of the war, Gordon Jacob had a late start in professional composition, but the fortune to have Ralph Vaughan Williams and Herbert Howells amongst his tutors at the RCM which gave him a grounding in a less 'Germanic' style than had previously been taught at the College, although Charles Villiers Stanford from the previous generation of composers was also amongst his tutors.

Rather like Arthur Bliss, Gordon Jacobs's composition style owes more to early 20th century French and Russian technique than German Romanticism, which had largely fallen out of favour following the War.

Symphony No 1
It wasn't until the late 1920s that Gordon felt sufficiently ready as a composer to commemorate his brother Anstey. The resulting Symphony No 1 is a turbulent but often radiant work which would appeal to fans of Moeran's Symphony in G Minor. The work, unusually, is in five movements.

The martial, brass-heavy, almost mechanised first movement is followed by an elegiac Holstian second movement where one can almost feel the trudge of soldiers. Gordon himself wrote that the movement is 'in the style of a funeral march' - this movement is perhaps the heart of the work.

A light scherzo forms a strange juxtaposition to the oppressive music preceding it. A more romantic, even pastoral fourth movement written in a folk mode perhaps hints at his tutelage by Vaughan Williams.

The final movement Allegro con fuoco brings back the sense of turbulence, perhaps even anger from the opening material, although there is a light touch behind the heaviness, and the work ends on a major chord, perhaps hinting at his own luck of surviving and what must have been an ambivalent feeling towards the whole conflict - would he have become a composer were it not for his war experience?

The work is rarely performed, although the second movement has been played separately, for example it had its premiere at the Three Choirs Festival in 1934 some years before the rest of the symphony (which had apparently been rejected by the Directors of the Proms). Similarly, the BBC National Orchestra of Wales performed the second movement as part of its Somme Centenary concert in 2016.

The full symphony is available as a recording by the Royal Philarmonic conducted by Barry Wordsworth on the Lyrita label (Lyrita SRCD315), followed by his second symphony of 1945-6. The 2nd Symphony in C Major, composed 1944-45 was described by the composer as a 'meditation on war suffering and victory'.

One wonders how much his own frontline experience and personal loss in the Great War would have been in his thoughts still.

Bibliography
Thank you to the official Gordon Jacob website giving permission to reproduce photographs of the composer.