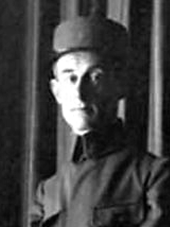 At the outbreak of the war, Maurice Ravel was determined to enlist. Unlike many of the war composers he was already well established, with works such Daphnis et Chloé, Ma mère l'Oye and Valses nobles et sentimentales gaining him a stature alongside Debussy as one of the pre-eminent French composers of his generation. Ralph Vaughan Williams had already spent several months in Paris learning "a little French polish" from the younger composer.

Many of his friends and relatives were therefore unsupportive of Maurice's desire to join the military. He was already 39, which was towards the upper end of ages for recruits. More problematically, his small stature and weight led to his rejection by various military selection panels.

He was particularly drawn to the idea of being a pilot or observer for the French Air Force, the assumption being that his light weight would be considered a positive attribute. While he pursued this, he took up a voluntary role caring for wounded soldiers in St-Jean-de-Luz, near his hometown of Ciboure in the Basque region.

His brother Edouard (1878 - 1960) was a motor engineer by profession and had been accepted as a military lorry driver, and this was what Maurice eventually decided to persue, taking driving lessons every day.

Maurice was passed fit for military service in the Thirteenth Artillery Regiment as a lorry driver in March 1915, whereupon he joined up immediately. (Nichols, 177) Initially, this mainly involved servicing military vehicles in Paris, which he evidently considered "time spent being busy not doing very much" while he continued (unsuccessfully) to pursue the idea of joining the Air Force. 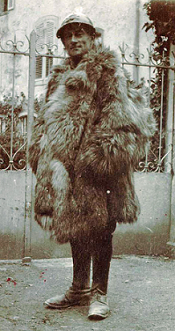 He was sent to the Front in March 1916 during the Battle of Verdun (February to December 1916) carrying cargo, particularly petrol. This proved to be a more exciting job than he was expecting:

One letter to an army officer says that he has been driving his truck, which he called Adelaide "Day and night without lights on unbelievable roads with a load double what my truck should carry...And even so, I had to hurry because all this was within range of the guns." (Nichols 183)

A photograph of 1916 shows the composer posing in a tin hat and an enormous fur coat, required because the cabs of the trucks were open to the elements and any stray ordnance; letters to friends and relations detail the bevy of breakdowns and near-misses he encountered on a day-to-day basis.

Despite these adventures, he still felt he could have been more use in another role. The Air Force plan was finally abandoned as by late 1916 an underlying heart condition (cardiac hypertrophy) was causing problems for his health; he appears to have caught various ailments such as dysentery, even during his period of recuperation from exhaustion.

This, coupled with the death of his mother in January 1917 left him in a frail state unsuited to returning to the front line. Morale was also low in the French Army; frontline troops were said to be "mutinous" by May 1917. He was provisionally discharged by June 1917.

His friend, the pianist Marguerite Long said this period was amongst the least happy of his life, finding him "depressed, thin and suffering from neurasthenia". Maurice's refusal to support an outright ban on performances of new Germanic music, advocated by La Ligue pour la Défense de la Musique Française, a panel containing some influential composers and musicians, led to a brief period where his own compositions were effectively blacklisted.

There was little escape from the war too, with Paris being bombarded from 75 miles away during the German Spring Offensive by "Big Bertha" howitzers, leading to blackouts and general destruction; Debussy died of a long-term illness amid one such bombardment in March 1918.

The piano suite Le Tombeau de Couperin was begun by Ravel in the Autumn of 1914 as a homage to the French keyboard suite of the 17th and 18th centuries. Interrupted by the composer’s war service, the composition of this work took place during this unhappy period; by the time of its completion each of the six movements had been dedicated to the composer’s friends who had not survived, including the husband of Marguerite Long who performed the work's premiere in 1919.

Despite its title and dedication, the suite is not a sombre work. "The dead are sad enough, in their eternal silence" the composer stated.