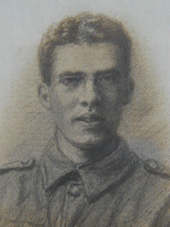 He was born in Edgbaston, Birmingham in 1885. According to Georgina Boyes' article about Wilkinson, his father was a member of the clergy at St. John’s Church, Ladywood, Birmingham while his mother was the daughter of the Bishop of Brisbane. He attended Uppingham School in Rutland and gained a scholarship to Gonville & Caius College, Cambridge, where studies in music led him to form a friendship with Cecil Sharp, and by age 19 he was already assisting Sharp in arranging country dance tunes.

It is likely some of the familiar published folk dance arrangements for piano or strings credited to Sharp may have had input from Wilkinson. According to an article published in the English Folk Dance Society News in 1924 by Mrs Helen Wilkinson (one of the dancers in the Kinora film on this site's Butterworth article):

His arrangements of some of Mr. Sharp’s folk-songs with pianoforte and string accompaniments are probably known to a good many readers. He was able to devote a good deal of his time to teaching folk-dancing, and he inspired people in many places who still keep up the dancing to this day. His dancing was a lesson in perfect finish and accuracy.

By the age of 25 in the April 1911 census he was boarding in Wandsworth, London, where his occupation was listed as "teacher of music". This perhaps corresponds with his employment as a music teacher at the Caius Mission House in Battersea, a educational college sponsored by the Cambridge College.

He became part of Sharp's folk dance demonstration side alongside fellow English folk dance enthusiasts and was evidently instrumental in the founding of the English Folk Dance Society, serving on its first executive committee. In this picture from 1911 we see left to right Douglas Kennedy, George Butterworth, James Patterson, Perceval Lucas, A. Claud Wright and George Wilkinson. 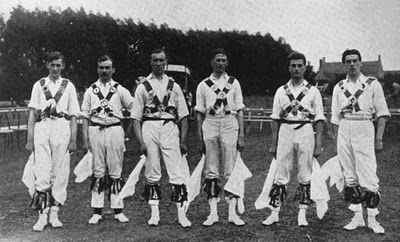 As well as his work with the Caius Mission and English Folk Dance Society, he taught music at Northaw Place School near Potters Bar, Hertfordshire between 1912-1914. Throught the dance team, he became close to Helen Dorothy Kennedy, sister of Douglas Kennedy, one of the other dancers. Georgina Boyes uncovered a story in her 2012 article about George (or "Wilkie" as his friends evidently knew him) purchasing a motorbike & sidecar and teaching Helen to ride it around Battersea Park, on one occasion nearly ending in disaster when she had not been shown how to brake properly. The couple later toured around the Midlands with the motorbike, but it is not thought they became engaged before the war broke out.

George joined the Schools Battalion Artists Rifles in December 1914. He became a sergeant in the 16th Middlesex Regiment which was a signalling battalion. There is a web posting of a unique scrapbook by a member of the regiment which features a pencil sketch of the composer drawn while the battalion was marching through France, presumably on its way to the Front.

Comparing it with the morris side photograph is undoubtedly the same man, and probably the last record of him. Tasked with storming Hawthorn Redoubt on the 1st July 1916, the first day of the Battle of the Somme, his battalion suffered heavy casualties. He was killed that day at Beaumont Hamel and is commemorated on the Thiepval monument.

Works
In terms of original compositions, George Wilkinson published a handful during his lifetime, but most were published in 1916, which implies they were published posthumously.

Titles currently listed by the British Library are the Choric Song from Tennyson’s “Lotos Eaters” (1916) a fairly substantial composition being scored for baritone solo, male chorus and orchestra, Four Songs about Children for voice and piano (1916), Nine Songs and Duets (1913), which are settings of various Japanese poems, and "Suzette" a song with words by Elizabeth B. Piercy (1916), the latter which Stephen Banfield writes is 'worth reviving for its Edwardian charm' (Sensibility and English Song, 134).

A transcription of "Suzette" may be viewed here and bass-baritone Jamie W. Hall and Andrew Hayman, piano, have made the first professional recording of the song, available to listen here:


On the basis of the Choric Song Wilkinson was evidently able to write for larger forces than just piano, although the orchestral parts are presumably lost. Did he write any other music that was considered uncommercial to publish and if so, where is it now?

Bibliography
Thank you to the staff of the Vaughan Williams Memorial Library and Anthony Whitaker of the Old Northavian Association Website for their assistance with some details about George Wilkinson's life.