George Butterworth is probably the best-known of the ‘war composers’, held up as emblematic of the lost talent of his generation. A keen folk dancer and cricketer, Butterworth and his music seem the very model of a particular type of Englishman. 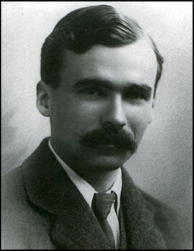 Relentlessly self critical, Butterworth regrettably destroyed the majority of his early compositions in 1915 before leaving for the Front, leaving four completed orchestral works, plus a tantalising fragment of a longer orchestral fantasia, his eleven song settings of A.E. Housman, a still unrecorded string quartet and a handful of other songs and choral pieces, all dating from the period 1910-14.

Several of his works remain in the repertoire. The justly famous orchestral pastorale ‘The Banks of Green Willow’ of 1913 is a staple of the English music canon. With genuine mass appeal, a century after its premiere the public voted it 80th in the Classic FM Hall of Fame.

Gerald Finzi wrote in 1922 that Butterworth’s music 'sums up our countryside as very little else has ever done'. Indeed the silver thread of the first English folksong revival is woven throughout his music, the clarity of his melodies and folksong modality still sounding fresh to the ear; no composer since has made a solo clarinet seem so redolent of an Arcadian English summer of oversaturated green and golden sunlight. Later works such as his rhapsody A Shropshire Lad display a darker, more uncertain tone and the fragments of an unfinished Fantasia for Orchestra give hints that this is the direction his music would have taken.

Listen to our podcast about Butterworth, including music excerpts

George Butterworth's choral arrangement 'We Get Up in the Morn'